Posted on March 7, 2020 by charliecountryboy

“That’s the best Curry I have had in 44 years,” I said. The waiter, quite possibly the owner of the Kashmir Restaurant in Bradford gave me one of those looks. I’m kinda used to them by now. He appeared to be thinking. ‘This bloke been locked up somewhere? Maybe he doesn’t like Curry? Maybe he’s just mad?’

I know that look, so I have learned to follow up my statements fairly quickly. I explained I had left Bradford 44 years ago and the Kashmir still does the best Meat Curry and 3 Chapattis known to man, ‘to be honest it’s a bit of a toss up between you and the Karachi,’ I thought but didn’t share. This was our final night of the Bradford research trek and it was my treat. In 1976 it would have cost me 60p for our meal for two, tonight it was £15, so still a bargain.

Earlier in the day I had checked us in at the Great Victoria Hotel. The villain (likable villain may I say) in the book uses this place a lot, so I thought I would have lots of questions for the staff about how the layout had changed since 1974 but thankfully not a lot had changed apart from the drink prices. This in itself was a blessing because most of the staff looked as though they hadn’t been born until 2004.

The hotel,  built in 1850 by the railway company, is an admirable example of Victorian architecture and typical of the ‘Stone City.’ 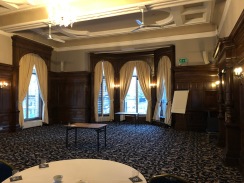 The following day was spent investigating more old haunts, the Princess was curious about a sign that stated. ‘Anti Social Car Behaviour will be prosecuted.’ I explained that the council was trying to stop kerb crawling and people having sex with prostitutes at the side of the road. Well c’mon this is Manningham. So all in all a good bit of research and reassuring that after 44 years, not much has changed.

29 Responses to Another Old Girl