Posted on April 28, 2018 by charliecountryboy

I used to attend a Gym in Yorkshire, this was 1997/98 when one day the owner said. ‘Hey Charlie how do you fancy doing the Three Peaks with me?’ Now at the time I was busy being a Disco King, so it wasn’t high on my agenda. He looked so desolate though, you know that look. ‘Please acquiesce to my plea for if not, I will surely die!’ Kind of a male version of Scarlet O’Hara, if you know what I mean. 🙂 So I said yes. This meant that from January to April I spent many painful Sundays training on the North Yorkshire Moors until the day arrived when aforementioned Gym owner said he’d pick me up in a van and off we’d go to Scotland as the first peak was Ben Nevis. Imagine my surprise when a van turns up with 3 complete strangers in it all asking the same question. Where’s our favourite Gym owner? ‘Ah, he couldn’t make,’ the van driver informs us. Hmm… Next stop Scotland where we slept in a hostel and set off up Ben Nevis at 6am the next day. It was a beautiful May morning, but apparently when you get to a certain height the weather can change.

Needless to say we did ‘Ben’ in 6 hours, I know it sounds deviant, and by twelve thirty we were heading for Scafell Pike in the Lake District. Oh! My Gym owner friend seemed to have forgotten to mention it was a 36 hour challenge and I’m using the term friend loosely here 😜. So we climbed Scafell at dusk and came back down at night hmmm.

We get a bit of kip and then off we go to Wales and Mount Snowdon. By this time the three strangers and myself were more like the three Musketeers, I always liked the idea of being d’Artagnan, but I’m not sure if he was rebellious, I am! The guides kept telling us to slow down and wait for the others, now I’m a caring person, but I can be a bit competitive and after we had slowed down three times I suggested that maybe the others could speed up a bit, which didn’t happen, so with the 36 hours falling away rapidly we decided to march on 😜. I don’t know if you’ve been up Snowdon, yes I know my posts can be a little like a Carry On film but I do mean the mountain, it gets a tad busy, because it’s not really a mountain (sorry Wales) it’s more like a steep hill. We fought and pushed our way to the top though and had the celebratory photo and a chocolate bar at the top. 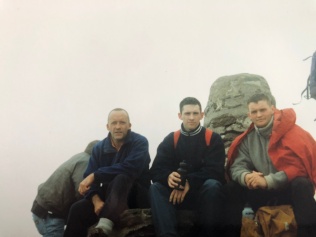 There we are congratulating ourselves when yours truly asks. “What time is it?” The reply is, ‘just after four.’ Now Maths was never my strong point but even my students would know that thirty six hours after 6am is going to be 6pm. There is a path down Snowdon, but as it took us over three hours to walk up it, getting down in an hour and a half was going to be a challenge. The only way down was to kind of shimmy across the paths, through what I presume was shale, a bit like skiing without the snow. We then ‘jogged in.’ I do not recommend ‘jogging in’ after climbing the three peaks as my knee couldn’t run for a year afterwards 😢 But hey! We got back at five forty five. Yay 😎😂 The ones we left behind? Were we heartless, cold and uncaring? Of course not, remember, we weren’t the SAS or Navy Seals (leave no one behind) We had a collection in the pub and when the rest eventually came in, stood up, applauded and bought them a drink. After all they completed and it’s the taking part that counts. (For some 😜😜)

22 Responses to Three Peaks in 36 hours