Posted on January 27, 2013 by charliecountryboy 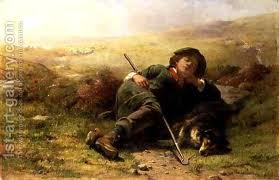 If you’ve ever had your favourite dog shot you’ll know what I’m talking about. If you haven’t, read on. I was about four and I was sat on the granary steps when my dad walked past with his shotgun.

The day had started off well. Awakened by the birds I stumbled downstairs where my mother handed me my mug and gave me a cuddle. Then I crossed the yard to the cow house where my dad was milking. He scooped the mug into the milk tank and I trundled back to the kitchen. After my fresh warm milk and my sleepy-eyed porridge I was dressed and outside by 8am. Teddy was getting his Spring wash and mum was doing said washing, so comrades were in short supply.

I had two dogs, one had four legs and the other four wheels. Even though the four-legged one (Judy) was the farm dog, rather than my dog, she and I played together a lot. Judy had got away early, no doubt hunting rabbits on the long ago abandoned aerodrome that adjoined the farm. The four-wheeled one was destined to be dragged around on extreme terrain for most of the morning. Judy had presumed that hunting rabbits was a far better option than being adorned in a dress and floppy hat, whilst acting as the co-host/fall guy for the days matinée. How wrong she was. When a dog avoids being a prop in a four-year-olds variety show she leaves the farm early, not renown for her rabbit hunting skills she becomes hungry. Couple this with the fact that some, unscrupulous people poison meat and put it out for the foxes and you get a situation where a father walks past his son at four  o’clock in the afternoon with a loaded shotgun. The dog had been howling since just after her return.

My mother explained why dad was going to shoot him. It was just one of those things, it was kinder. And if I wanted she would push me around on my bike and we could play cavalry and I could be John Wayne. Then we heard the shot. It’s funny but until I recalled this story I hadn’t realised that since that day I have never owned a dog.

14 Responses to My Dog